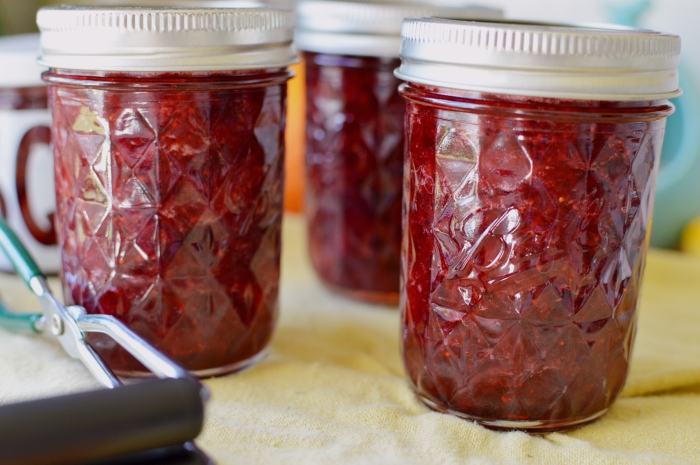 Only two weeks until I graduate from college! Over the last couple of months, my mind has returned many times to an old nugget of J.K. Rowling wisdom: “It is a strange thing, but when you are dreading something, and would give anything to slow down time, it has a disobliging habit of speeding up.” Except, in my case, I’m not dreading a fight with a Hungarian Horntail. Rather, I’m simultaneously dreading finals and excitedly awaiting graduation.

The last month has felt like an absolute whirlwind, during which I’ve gone back and forth between stressing out to the point of hyperventilation and taking way much time for non-school activities, such as watching episodes of The Great British Bake Off or making jam. However, some noteworthy events have occurred within that haze that I simply must put into words.

About a month ago, Debbie came into town for a few days. She arrived on her birthday, so I took a pleasant break from homework to make a miniature cinnamon chocolate cake to surprise her with. Jonji spent much of the weekend working at the hospital and I was forced to take a lot of time for homework, but we did manage to take her to our favorite neighborhood cocktail joint/restaurant, Little Fatty, and spend some much-needed time in the sun out on our front lawn.

A week or so later, I was notified that I was made the Valedictorian of the Otis Class of 2017! That, along with notification of a couple other academic achievements, caused my parents to drop all their plans on Sunday and drive to LA for a 24-hour period in order to make it to the Otis Awards Banquet. Jonji, too, was able to come, and we all enjoyed a particularly lovely evening at Otis, meeting other students and their families and clapping for those students who had received awards. I tried in vain to avoid walking awkwardly up to receive my own, but the standing ovation from my family and their table made the walk that much easier. We spent the rest of the evening at Little Fatty with a cocktail each to celebrate, despite the fact that it was a Monday night.

Having my parents and Jonji there—who have loved and supported me throughout my Otis career—made my awards that much more more exciting for me. I’ve never started school with the ambition to finish top of the class; rather, my own innate stubbornness matched with a desire for perfection has resulted in great outcomes over the years. It is rewarding to know that all of that work—the stress, the mind-numbing attempts to come up with new ideas, the attempt to juggle healthy living with homework deadlines—has all paid off.

My parents spent the next morning with me, Jonji having left at 6:30 am. We made a scrumptious breakfast of waffles (from the new Liz Prueitt book, Tartine All Day, which is a phenomenal book), sausage, bacon, eggs, and toast with my own strawberry jam. We said our goodbyes at 10:30, sad to end the visit so quickly but excited at the prospect of an extended stay come graduation.

The day before my parents had arrived, I had somewhat brashly taken my favorite farmer, Frank, up on his offer of a discounted flat of strawberries. I had planned on making Liz Pruiett’s Strawberry-Orange Jam, and asked Frank how the strawberries were. He told me they were fantastic, and if I waited until 1:30 pm he’d give me a flat for an insane price. I was originally planning on getting three baskets, but who was I to turn down a bargain like that? And that’s how I ended up with 12 baskets of strawberries on a Sunday afternoon that was really supposed to be used for homework. Instead, I spent a few hours stirring a bubbling cauldron of strawberry-orange jam, sweating from the jam’s steam and the giant stock pot of boiling water for sealing the subsequent jars. By the end of the week, I had about 16 jars of jam. I’ve had a hard time suppressing the Smaug in me, who insists that I should keep them all to myself.

However, I did manage to tone down Smaug enough to bring several jars to a foodie-swap hosted by our friends Ryan and Sarah. Jonji and I had fun with the labels—the cat heads were his idea. The swap was really cool; we ended up with several delicious items, like whey-fermented salsa, spicy cashews, and blueberry muffins, and spent a lovely afternoon at the park.

Since I’ve spent several hours making jam that otherwise would have been spent working on homework, you can be sure that this jam is worth it. I’m providing two jam recipes because it’s more fun that way. The first is a basic recipe that I found in Kevin West’s Saving the Season that’s no-fuss and pretty much fool-proof. The second is my version of Liz Pruiett’s recipe with orange; I reduced the sugar and orange amounts to my own preference, and it turned out extremely well. The pure flavor of perfect strawberries shine, and they’re both very much eat-by-the-spoonful recipes. The short ingredient list should push you to grab the best strawberries you can find from the Farmer’s Market; supermarket berries simply won’t cut it. And no need to get a flat, like I did—unless, of course, you’re offered one at a discounted price. After all, who could say no to a giant tray of strawberries? 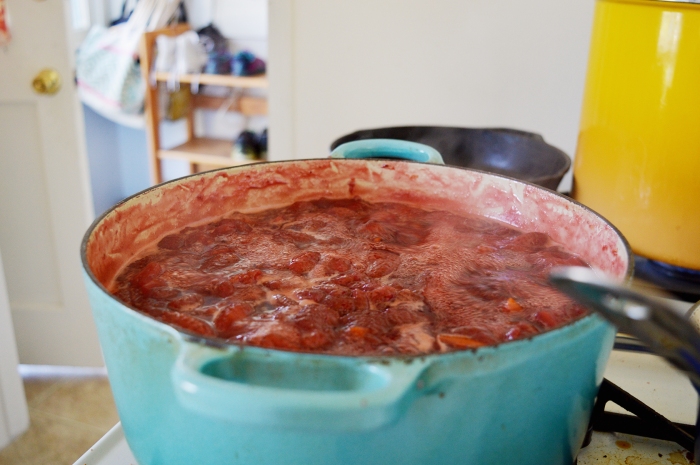 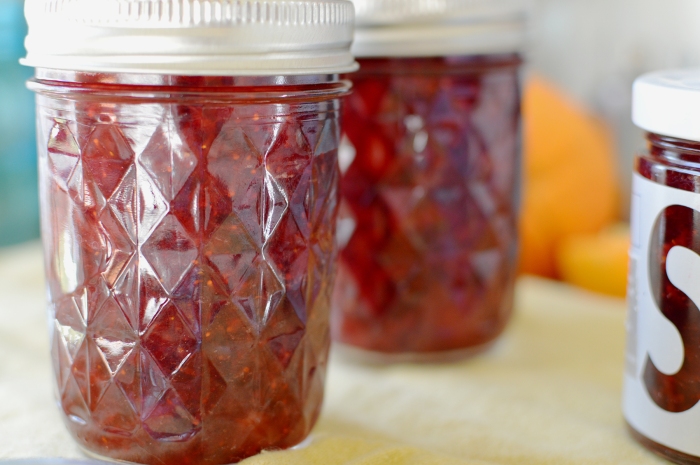 (Skip this part if you’re simply going to store your jam in the refrigerator). Fill a large pot with water and bring to a boil. Place a round cooling rack (or several mason jar rings) on the bottom of the pot. Once the water is at full boil, lower 3 half-pint jars and their lids, separately, into the water. Boil for 10 minutes, then remove to dry on a cooling rack covered with a dish towel (tongs made especially for canning/sealing are a worthwhile investment for this). Turn the heat down and leave the water at a simmer until time for sealing.

Rinse and hull (remove the tops of) the strawberries and place them in a large bowl. Smash the berries with your hands or a potato masher (I use my hands, but I cover the strawberries with parchment paper first so my kitchen doesn’t get a pink polka-dot covering). Transfer the berries to a large heavy-bottomed pot or dutch oven, and add the sugar, lemon juice, and a few gratings of lemon zest. Stir to combine and turn the stove on high heat. Stir frequently to prevent sticking. Skim off and discard any pink foam that rises to the top. The mixture should stay at a rolling boil, but you can mess with the heat if it’s boiling too quickly. Stick a plate in the freezer.

Cook until the jam reaches the gel point (roughly 10 minutes), which means that when you place a tsp of jam on the cold plate, put it back in the freezer for a minute, and then run your finger through it, the jam should get a slight wrinkle on the surface. Also, if you stick your fingers together, a slight string should appear when you pull them apart. Note: turn the jam off whenever you test for the gel point. Another way to check is with a thermometer: the jam should get to about 121°F at sea level.

Fill your jars using a ladle, a funnel, or transfer some to a measuring glass and then fill. Only fill to 1/4-inch from the top. Wipe the tops of the jars off with a damp paper towel. Screw the lids on, but not too tightly—when you feel the first bit of resistance, raise your pinky finger like you’re having a tiny cup of tea and continue tightening. This ensures that enough air can escape in the sealing process. (If you’re storing jam in the fridge, you can stop there.)

Turn the large pot of water back up and bring to a boil. Lower the filled jars into the boiling water and leave for 10 minutes. Remove and set aside to cool. If the lids pop down (you’ll hear it happen), then the jam is good to go. Enjoy!

Cut the orange half in half again (perpendicular to the top) and slice each quarter as thinly as you can. Cut each slice into small or large chunks, depending on your preference. Add to a medium pot along with 1 cup of water and simmer for 20 minutes.

Prepare the strawberries the same way as above. Add to a large pot or dutch oven along with the sugar, the lemon juice, the cooked orange and its cooking liquid. Cook the same way as described above until the mixture reaches gel point, roughly 15-20 minutes.

Fill and seal the jars, then cool. Store in a cool, dry place.