The cooling air has made my nesting tendencies much stronger, which led me to spend an entire afternoon making pillow cases for our throw pillows. The couches now look fantastic, and are ready to be snuggled into when LA turns frigid (that’s a relative term). Kitty especially appreciates my nesting, and tries out each couch for a couple hours per day.

A couple weeks ago, Jonji took me to Disneyland to complete my experience of the entire park. We went with Todd and Jessica, who are Disneyland experts and who filled in our day with random fun facts about the history of the park. On the first ride we went on, the staff member who was regulating the ride told us to wait at a certain point. After a while we walked forward, assuming it was time, and was grimly told by the man, “You’ve just made the wait much longer for yourselves.” He was not only rude, but also entirely wrong, as we got to the front of the ride in no time. Later on in the day, we asked a man at one ride where the line began and he directed us on the most round-about, incorrect way to get there—we assumed it was the first man’s friend getting revenge. The last ride of the day was Splash Mountain at 5 pm, when it was actually getting a bit chilly. On the big drop I heard an “Oh, no!” from Todd behind me, and then felt the wave of water crash over us. Apparently, the ride never gets riders that wet, but the girls in the front looked like they had just emerged from a swimming pool.

This past weekend was Halloween, as you all know, and Jonji and I were very social for once. Since we had two events to attend in-costume, we scrambled to come up with something on Thursday night. I began looking around our place for anything to use, which led me to two extra-long pillow cases that we’ve never used. I mentioned cutting out holes for our heads and arms, and after a few minutes of discussion we decided to be Hogwarts house-elves. The next day I added to our high-tech costumes by creating paper ears and tracing the Hogwarts crest onto the pillow cases. I’m pretty proud of the outcome, I must say.

On Friday evening, Jonji had arranged for a casual dinner with some of the Depot members. Half an hour before we had arranged to meet, however, he told me that he would be late because he was being held over at the hospital. I went anyway, but pretty much everyone else was running late too. So Jason, the only other person on time, and I had a lovely, hour-long dinner date, the main topic of conversation of which had to do with our mutual love of fantasy books. Everyone else eventually arrived, and then after dinner we all ventured over to Depot for the Halloween party. Everyone at the party was surprisingly good about dressing up, and a lot of people actually got that Jonji and I were house-elves.

The next evening we drove to Todd and Jessica’s, where we were greeted at the door by two Top Gun pilots (hint, it was really Todd and Jessica). From there the four of us went to eat ramen for dinner, which Jonji and I had never had before, where we were met by a couple more friends. The pork buns were delicious, and the ramen very warming. After we had all eaten as much as we could, we all journeyed back to Todd and Jessica’s for dessert and games. Todd had invited another friend and told her to bring her snake because, to use his words, it made Halloween way spookier. The games that we played included salad bowl, which is a combination of Catch Phrase, charades, and, in this case, charades with a blanket over your head (yes, you heard me right, a blanket), and also Telestrations, which I had never played before but can’t wait to do so again. Definitely one of my favorite Halloweens, since now I’m too old to trick-or-treat and I only really want chocolate candy. No more fruit candy for me!

My parents are coming down to visit this weekend, which I’m very excited about. We made plans a few months ago, and then Jonji heard a couple of weeks ago that he had been accepted as a UCLA Med School rep and the only major conference he had to attend was in Baltimore on this coming weekend. Bad timing, doctors. But congrats to Jonji, on the plus side! So it will be just me and my parents over the weekend, which is bound to be filled with lots of great eating experiences. Also, I’m planning on making them the following recipe, since I’ve raved to them about it for months and they’ll kill me if I keep making them jealous without giving them a chance to taste it.

I realize that I have already posted a recipe for apple pie, but bear with me. These pie pockets are one of the best things I have ever come up with because you need no occasion to make them. An apple pie is large-scale baking and requires a good excuse, like a holiday or dinner party. These pie pockets are for any and all occasions, including that night when you really want pie but you don’t want to make a whole pie. Especially that night.

Make the pie dough in advance. Put the flour, sugar, and salt in a food processor and pulse to combine. Drop the butter chunks over the surface of the flour mixture and pulse until the butter chunks are the size of peas. Add the water 1 tbsp at a time, mixing after each tbsp, until the dough becomes cohesive and sticks together in one clump. Divide the dough into four pieces and shape into 1/2 inch thick discs. Wrap and refrigerate for at least two hours, and up to two days.

Make the filling: Place the chopped apple chunks in a large bowl. Add the sugars, cinnamon, nutmeg, allspice, cloves, salt, lemon juice and zest. Stir to fully coat the apples, then set aside.

Lightly dust your cooking surface with flour. Roll one disk out to 1/8 inch thickness. Mound 1/4 of the apple mixture in the center. Carefully pull in one side of the excess dough as if you’re folding clothes. Continue pulling in and folding the dough, moving in a circle, until the pocket has the rough shape of a hershey’s kiss. Poke four small holes close to the tip of the apple pocket with a knife and then carefully place on a baking sheet lined with parchment paper. Repeat steps with the other three dough disks.

Bake the pie pockets for 25 minutes, then turn the oven down to 375°F and bake for another 40–50 minutes. Enjoy warm or cool—either way is delicious! 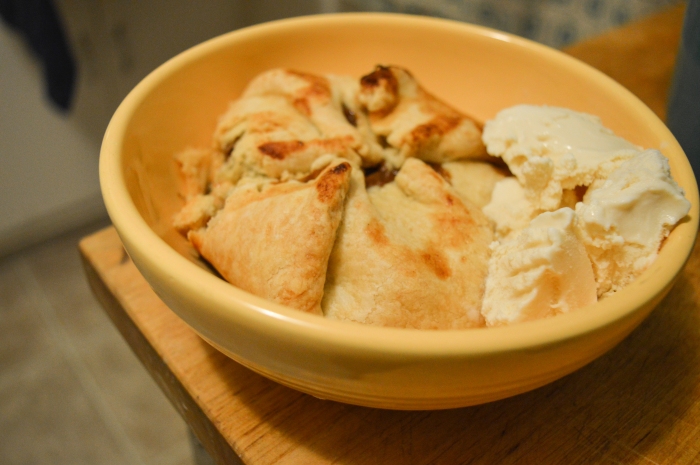 One thought on “Apple Pie Pockets”