Summer Break is finally over, as of this week. I have mixed feelings about it—on one hand, I’m excited to go back to school where I will once again learn and feel productive, but on the other hand, I’ve really enjoyed my summer of reading, printmaking and hanging out with my cat.

This past week I faced my fear of airplanes and flew home for the last visit before the holidays. My parents picked me up from the airport and whisked me straight off to Tartine Bakery in San Francisco. Dad snagged a table while Mom and I stood in line, passionately debating over which baked goods to get. We settled on the most delicious Tartine classics: chocolate croissants, morning buns, an open-faced sandwich, and a gorgeous coconut cream tart. We savored each bite, alternating between bites of pastry and sips of creamy coffee. 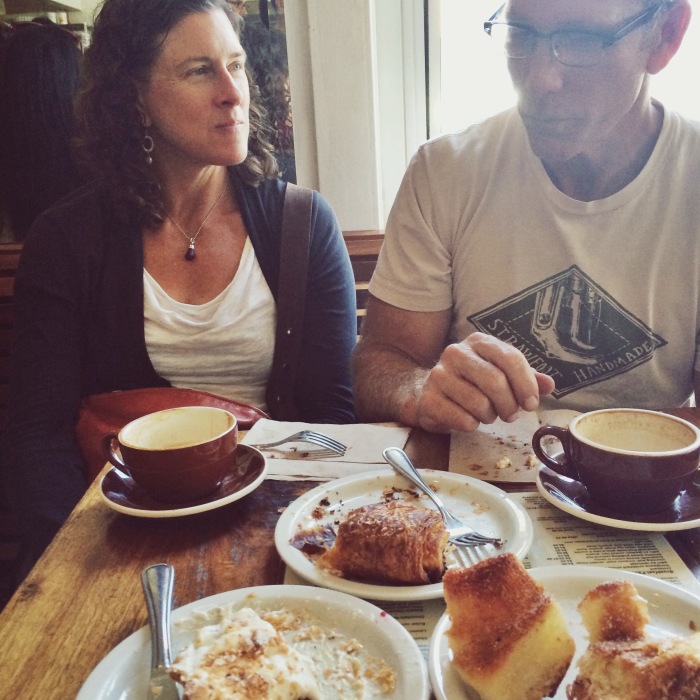 After Tartine we drove the short distance into Noe Valley, where Mom and I ventured into Ambiance to do a little clothes shopping. Dad, showing a supreme feat of patience, read outside at a nearby coffee shop while Mom and I tried on at least half of the store. Seeing as I have absolutely zero fashion sense, I was grateful to have the assistance of one of the girls working there, who helped me get out of my fashion comfort zone (meaning Lulu, Vans, and plain tank tops). After three hours (again, you are a Saint, Dad) of trying on clothes—which, by the way, generates almost the same amount of sweat as a CrossFit workout—we left the store with a glorious selection of fashionable items. Look out, LA!

Our next stop was Omnivores, a book shop dedicated entirely to cookbooks, which is basically my dream come true. I could have bought half of the store, but settled on Tender by Nigel Slater, which looks excellent. Part of my excitement comes from owning such a large book (it’s approximately three inches thick), but I’m sure that the recipes are excellent as well.

Finally, we ended our extravagant day at Bar Tartine, where we elected to eat the pre-determined menu. There were 15 dishes total, which were broken up into four courses. Each dish was brought out with a portion for each member of the party, all beautifully prepared. Starters included king salmon with fennel, avocado, and matsutake mushrooms, beef tartare on toast with tonnato sauce and dried beef, and chilled cucumber soup with buttermilk and almonds. We slowly worked our way through each dish, defending nearly-clean dishes from waiters so that we could sop up extra sauce with the excellent Tartine bread. We drove home with full bellies and our bags of loot, looking forward to falling into our beds.

The next few days went by in a blur. On Wednesday I became a pack mule for Mom at the Farmer’s Market, after which we got to visit Danielle and Leif’s newest family member, the beautiful little Jubilee. Later on we made root beer floats with Mom’s vanilla ice cream. On Thursday I joined Mom and Dad in taking Pippin up to the forest, where he blended in amongst the redwoods while we sweated in the dry forest heat. Later in the day I spent a couple hours in the studio as if it were old times, listening to Harry Potter and working on Ribbon Street wallets. Mom and I then cooked dinner, and I prepared a peach and blackberry galette for dessert. After Bailey added another half a slice to her plate, we all ended up with one and a half pieces—no one wants to miss out on dessert! Finally, that night, Dad and I picked Jonji up from the airport.

Friday began with a workout at CFSC. Jonji and I then went to breakfast with his mom, which didn’t quite work out as planned. We had parked on Bay Street and walked down to the Picnic Basket, which, we found out, had no shade and was absolutely sweltering. Since I was exceedingly hangry already, I ordered a breakfast burrito in preparation for a walk downtown to a different restaurant. It was really quite good, but it was slightly ruined by how long it took to get. After a walk downtown, during which my feet were roughly introduced to a new pair of shoes, we sank down into chairs in the AC-filled dining room of Hoffman’s where Jonji explained the rules of Battleship.

That evening my parents hosted a family dinner. I, being the only other master chef in the house (right, Mom?), joined Mom in the frenzy of dinner prep. We peeled, sliced, chopped, snapped, sautéed, ground, and diced. By the time everyone was gathered in the backyard, Mom and I were still finishing up elements of the dinner. Of course, no dinner made by Kitchen Hana and Smaug can go without a bit of arguing; this time it was over which plates to use (“No, Hana, we need the large plates! …Ok, fine. Use the small ones. Ugh! These bowls look TERRIBLE.”). The meal was perfectly plated: carrot puree covered the bottom of the bowl, which was then topped with sautéed pea shoots and green beans, followed by a hefty chunk of pan-fried halibut and finished off with a dollop each of creme fraiche and pistou. We all gathered around the picnic table outside and enjoyed the feast and each other’s company. Later in the evening we started a game of Sequence, which my dad had picked up while Mom and I were shopping in SF. The game quickly became heated, with Bailey pounding her chest like a gorilla in excitement when she had the right card and all of us alternately singing, “It’s goin’ down for reeeal.” 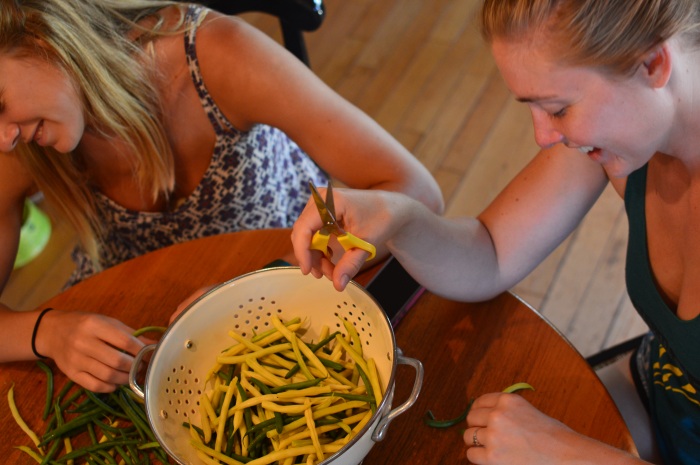 On Saturday I spent the morning cooking in preparation for my impromptu print show, which Mom had organized for me. Mom never does anything half way, so by the time guests had arrived we had the prints set up in order and a separate table filled with frittata, fruit, scones, and bubbly water. The next few hours were filled with friendly catch-ups, food, and print-talk. Jonji and I spent the rest of the afternoon with Taz and Oakes at Debbie’s apartment’s pool, where we played with acorns and Superman, and then ended the evening with dinner back at Taz and Pat’s house.

Finally, Sunday arrived. My family, who wastes no time, organized a quick goodbye breakfast in the morning, which naturally included Companion baked goods. After saying our goodbyes, we went over the hill for a Barber breakfast before finally arriving at San Jose Airport at midday for our flight home. I already miss Santa Cruz and my family in it but, as Dumbledore said, “We must try not sink beneath our anguish…but battle on.”

This “salad” is the epitome of summer—it is not to be trifled with in the cold months of the year, when heirloom tomatoes taste like sand. My mom told me about the dish, having found it in Suzanne Goin’s book, Sunday Suppers at Lucques. I had it twice in the few days that I went home, and plan to make it in the following few weeks while the tomatoes are still at their peak. The combination of sweet tomatoes, soft burrata, and slightly crunchy crutons is simply perfect.

Preheat the oven to 375°F. Tear the bread into 1 inch chunks and toss in a bowl with plenty of olive oil (roughly 1/4 cup) and a couple pinches of salt. Spread on a baking sheet and bake for about 15 minutes, until golden and still slightly soft. Set aside.

Make the dressing: using a mortar and pestle, grind the oregano, marjoram, garlic, and 1/4 tsp salt until it looks like a paste. Scrape into a bowl and stir in the vinegars, then whisk in the olive oil.

Slice the cherry tomatoes in half and put them in a medium bowl. Cut half of the heirloom tomatoes into wedges, roughly the width of your thumb, and add to the bowl. Cut the rest of the tomatoes into 1/4 inch slices, but do not put them in the bowl. Sprinkle the slices with a little salt and olive oil. Slice the burrata into bite-sized chunks.

On a large platter, arrange the tomato slices and burrata, alternating and overlapping. Sprinkle some of the basil on top.

Gently toss the tomato wedges and cherry tomatoes with the shallots, a pinch of salt, some pepper, and half the vinaigrette. Fold in the crutons. Pile the mixture on top of the plated tomatoes, drizzle the rest of the dressing on top, and sprinkle over the parsley and the rest of the basil. Enjoy!