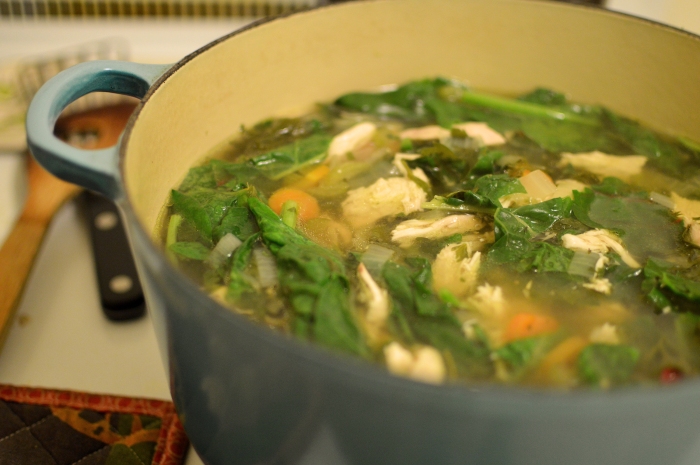 Spring Break is finally here! Although, since Jonji already had his break, it has so far consisted of doing homework and running errands that I’ve been putting off until now. But still, it’s a nice break from the usual routine.

Two Saturdays ago I went on a class field-trip to the Santa Monica Museum of Art, while Jonji studied in a café nearby. The exhibit we went to see was exceedingly odd and slightly unnerving, as it had a lot to do with crime and the AIDS epidemic. As we were leaving the gallery, however, my friend Billy got extremely excited and asked Alaura and I to take a photo of him with a man standing close by. It was then that I realized that it was David Cross, AKA Tobias Funke from Arrested Development. Once we had gotten outside, I told Jonji who we’d seen. Of course, he went to go in for a peek, but not before being called out by my teacher to answer a question as she attempted to get a student discussion going. “I, uh, I’m not actually a student here,” Jonji stammered as he attempted to get inside the gallery. Poor Jonji.

The next day, Sunday, Jonji manned a booth for exercise at the Kidney Health Fair in Santa Monica. The night before I had slaved away making a large sign for his booth, complete with anatomically correct cartoon drawings—the fusion of the art and medical worlds has never looked so cute. I joined Jonji at his booth after I went to the Farmer’s Market. I sat behind the table, doing my homework and trying not to make eye contact with approaching fair-goers. A couple people did corner me, however, and I did my best to make up semi-informed responses to questions about kidney disease. Don’t worry—I didn’t actually give out real medical advice. The best part of the event, in my opinion, was that we somehow managed to get featured on a Spanish TV channel! And by we, I mean our sign made a 5 second appearance.

This past Friday, Jonji and I once again found ourselves at the gym for the third Open workout event. After judging multiple heats, we went home to eat before joining friends (from the gym) at a nearby bar. The place was dark and loud, but we had a great time talking (more like yelling) with Liz, Brad, Eric, and several others. A mere two drinks was plenty for me, one of which was a cider, and we left around midnight. Outside the bar, the night was still warm from the 90° weather that stuck around throughout the entire weekend—gotta love the LA winter weather.

On Saturday around 2 PM, we drove into Hollywood to spend time at the Hotel Roosevelt pool for Eric’s birthday. Coming from Santa Cruz, this was the LA I had expected to be surrounded with: impeccably made-up women in tiny bikinis tanning on the sides of the pool surrounded by buckets of iced champagne, while pool boys bustled about making sure that everyone had clean, white towels to recline against. I attempted to look as though I was “hip” to the scene, but my nearly transparent skin and lack of bling gave me away. Jonji and I took a dip in the pool—perhaps the only two people to get our faces wet—and then lounged on recliners until sundown. We also had another celebrity spotting moment, when two characters from Arrow, a superhero TV show, strolled past our lounge chairs. We totally nerded out over Thea and Diggle while no one around us seemed to share in our excitement. 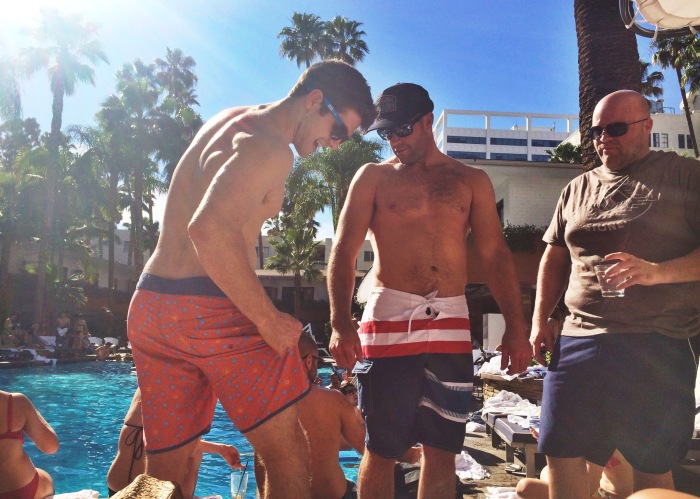 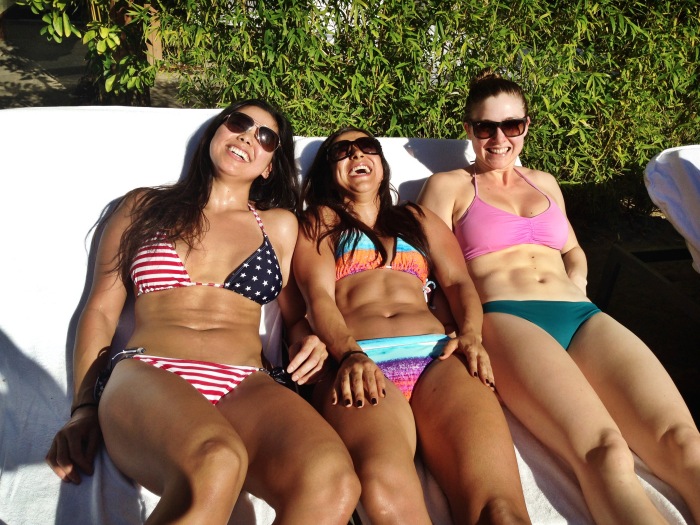 The rest of this week hasn’t been quite as productive as I’d hoped, mainly because I came down with a slight flu that does nothing but sap all the energy out of me. I have, however, logged quite a few good hours with Netflix and spent plenty of time cuddling with Kitty. I guess it was lucky that I had no big plans for the break, after all. 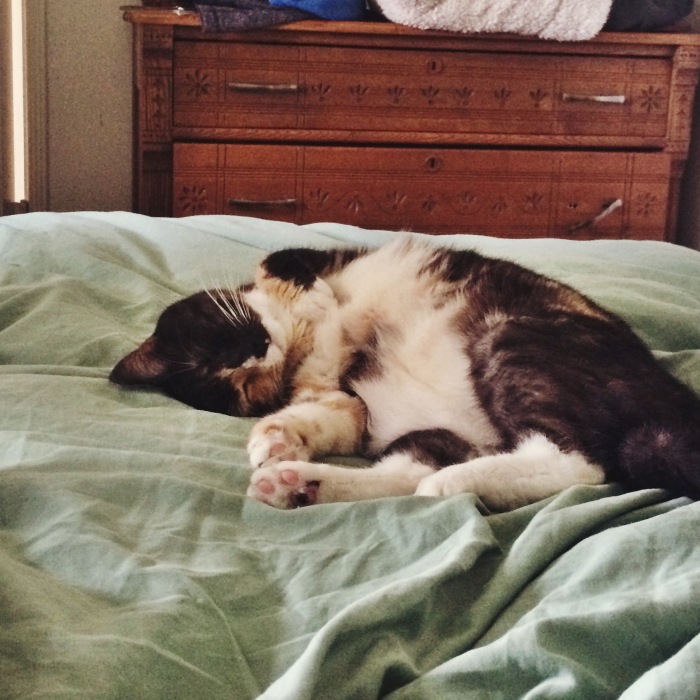 The following recipe is especially good in the cool Fall and Winter months but, heck, I made it last week when it was 80° and it was just as satisfying. It’s extremely easy to make, and it makes you feel all warm inside. It’s also a great chance to get creative and add whatever vegetable you want. Each time I make this soup, I always think of those miniature children’s books about chicken soup with rice—”sipping once, sipping twice, sipping chicken soup with rice.” If you don’t know what I’m talking about, just ignore my reminiscences and enjoy the soup. Pair with biscuits or cornbread for an especially heartwarming meal. 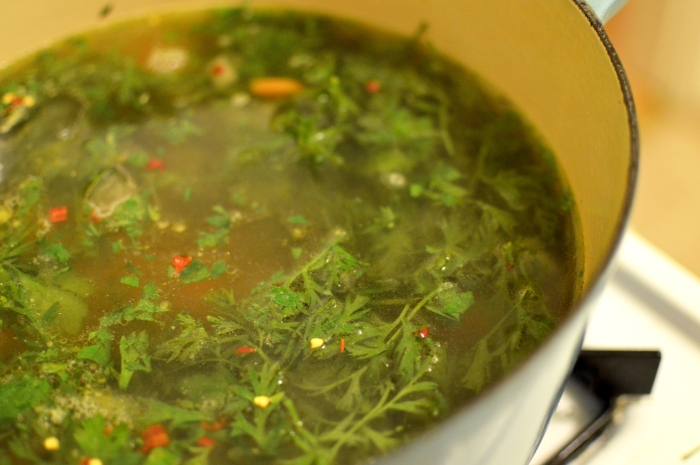 Start by heating the olive oil in a medium–large pot over medium heat for 1 minute. Add the onion, carrots, celery, cloves of garlic, bay leaf, thyme, 1 tsp salt, and some pepper. Sauté for 5–10 minutes, until the onion is slightly softened and the vegetables are just starting to color. Add the chicken to the pot, along with another tsp of salt and a bit more pepper. Cook for another minute or so.

Add all of the chicken broth, then the parsley. Bring the soup to a boil, then turn the heat down and simmer for 20 minutes. Taste for seasoning.

Meanwhile, prepare the greens. Cut the major sections of stem out of the chard, then tear into bite-sized chunks and place in a salad spinner. Cut the stems off the spinach and place the leaves in the spinner as well. Clean thoroughly, then spin lightly. Add the greens 5 minutes before the soup is done.

While the soup is simmering, bring a small pot of water to boil. Add 1 tbsp coconut oil to the water before it boils. Once the water boils, add the rice and cook at a gentle boil for 10–12 minutes, or until the rice is cooked but not mushy. Drain, then add butter and salt, or simply serve it plain.

Serve the hot soup over the rice. Sipping once, sipping twice, sipping chicken soup with rice.

*I like to roast a whole chicken the night before, using the Roasted Chicken with Potatoes recipe and save most, if not all, of the chicken breast meat for this soup. If that doesn’t work for you, place two whole chicken breasts in a baking dish, sprinkle with salt and pepper, add a bit of water to the pan, cover with aluminum foil, and bake for 40 minutes at 400°F. Shred once the chicken is cool enough to handle. 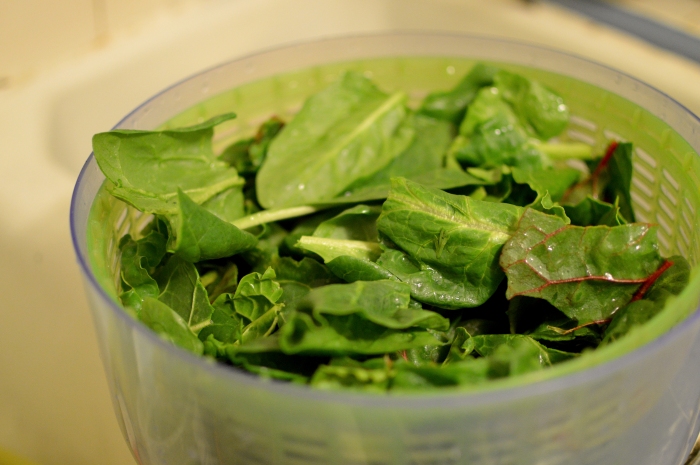 3 thoughts on “Chicken Soup with Rice”

There was an error retrieving images from Instagram. An attempt will be remade in a few minutes.