I feel like I always say this, but the past couple weeks have been crazy busy. Last week Jonji was preparing for his final that took place on Friday (it went very well, by the way) and this week has basically been my midterm week. Oh, and the CrossFit Open started last week, which, despite my assurances the rest of the year, never ceases to make me incredibly nervous. So, really, crazy busy is a pretty good description of life at the moment.

Like I said, the Open began last week, with the first workout announcement on Thursday. I tried not to gym-geek (oxymoron?) out too much, but the announcement happened during my study-hall-like class and I just had to see it. Turning the brightness down low, I surreptitiously watched it with my friend Alaura, who may think I’m extremely weird because I felt strongly compelled to watch two shirtless men work out for 15 minutes. She still talks to me, though, so I think I’m okay.

I did the workout the next morning after dropping Jonji off for his final. Matt, Liz, and I talked strategy for half an hour before finally starting to warm up. Overall, the whole event went well! One down, four more stressful days to go! I went back to the gym in the evening to see Jonji do the workout, and to help judge for the Friday Night Lights—basically a competition-style set up at the gym for anyone wanting to do the Open workout. Once we had gotten our fill of judging, we hurried back home to eat and get ready for the UCLA Medical School Formal. After stabbing myself in the eye with my mascara brush and squeezing into my junior-year prom dress, we were ready to go. We found the place, The Victorian in Santa Monica, and found our way to the designated Formal area. I attempted to look as though I wear heels on the daily, rather than once every three years, and chatted with Jonji’s classmates over the loud music. There was a two-hour open bar, which I took advantage of for two glasses of champagne, and then called it quits after the line became a mob. We stayed until midnight, deciding it was time to go because a) we usually go to bed three hours earlier, and b) a girl who had clearly loved the open bar was yelling at the bouncer. Both great reasons to jump ship, I believe. I hobbled back to car, hating the inventor of heels, and we gladly drove home to go to sleep.

The next day Jonji and I went shopping at Crossroads, where I tried to be open to new fashions in order to diversify my wardrobe. But there are some crazy fashions out there right now, and I am simply not daring enough to try them out. We ended up with a few good things, but nothing too fashion forward. Oh, I forgot to mention that the Crossroads we went to is literally next door to Neveux, so of course we dropped in for a visit (our third time in three weeks, I might add).

Jonji and I have also been quite adventurous with our meals lately. Last weekend I made some buckwheat waffles (mainly because I was out of my other flour), which turned out pretty good—I’d give them a B+. Pretty much anything warm and baked is good with butter and maple syrup. Jonji decided to make gluten-free pizza, which I had refused to make myself, seeing as I know how to make delicious gluten-full pizza. On the whole, it turned out pretty well! It was no sourdough crust pizza, but it had a good texture and taste anyway. Jonji was very happy with it, anyway. 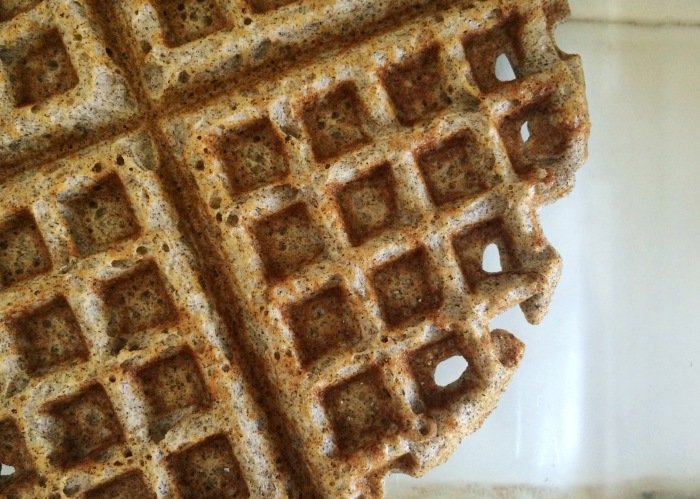 Jonji decided to go home for a few days over Spring break, which happens to be this week for him, but unfortunately my break is in two weeks and this week was too busy for me to accommodate a visit home. Instead, I got to wake up at 5 AM on Tuesday so as to get him to the bus that would take him home, which left at 6 AM. I like early mornings, but to me “morning” means at least a glimmer of light is in the sky—5 AM is nighttime, as far as I’m concerned.

Jonji planned to be gone for three nights, which actually worked out well in the scheme of things—I had plenty of homework to get done that I did not need distracting from. I had my midterm in History of Graphic Design on Tuesday, which went well (I think). It consisted of several written answers, both “short” (which were really quite long) and long (which were really long), and by the end my hand almost cramped up. Typing has really contributed to the degeneration of my writing muscles. I also have a big poster (for a faux reading series event) due this coming Monday, which means I’ve been working hard on getting that press-ready. In Typography we’ve been asked to set text for a mock-book, which takes a lot more time than one would think, and which I secretly take great joy in. Perhaps my adolescent book-loving will really is coming in handy.

Kitty and I had a few lovely evenings being couch potatoes, just the two of us. She’s become much more vocal lately, although she still sounds like a Nazgul whenever she lets out her version of a meow. I also went through a quarter of the amount of food we usually consume, while Jonji was away. I treated myself to a new duck confit that Mom had been telling me to try out, since Jonji isn’t the biggest fan of duck—it was delicious, by the way. I also took to reading my ice cream cookbook before bed too. Way to take advantage of my time alone, right? I think so.

This dish is one of my all-time favorites. It has been adapted from a David Leibovitz recipe in My Paris Kitchen (from which also came the duck confit recipe), which is quite a splendid book. This dish has a truly wonderful combination of flavors and textures: the crunch of almonds, the chewy lentils, and the soft feta all work extremely well together. It pairs especially well with simple foods that need a hefty partner. 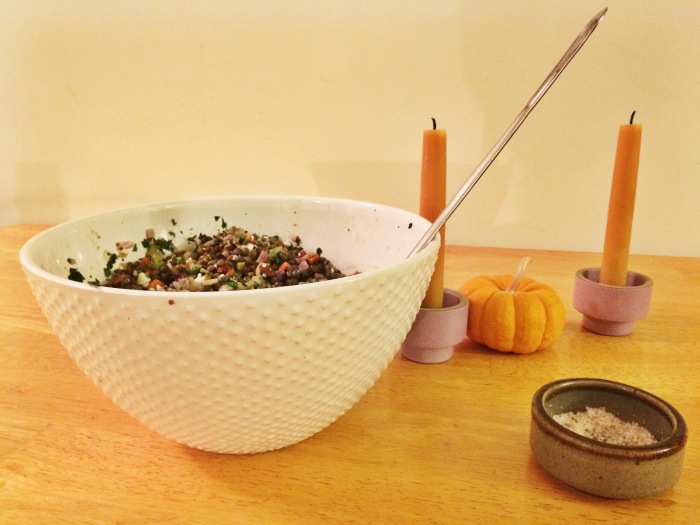 Rinse and drain the lentils, then place them in a small pot with plenty of lightly salted water, the bay leaf, and the thyme sprigs. Bring to a boil, then turn the heat to low and simmer for 15 minutes. Add the diced carrots, celery, and onion, and stir once to evenly distribute them among the lentils. Cook for another 6–10 minutes, until the lentils are cooked but not mushy (they should not be entirely soft to bite into).

While the lentils cook, make the dressing. In a medium or large bowl, combine the red wine vinegar, mustard, shallot, salt, and olive oil. Whisk to combine, then set aside.

When the lentils are done, drain thoroughly. Add to the bowl containing the dressing, then stir to coat the lentils with the dressing. Let sit, stirring occasionally, while you prepare the final ingredients. Once the lentils have cooled slightly so that they are warm but no longer hot, add the almonds, parsley, feta, and pepper. Stir a few more times to distribute all ingredients evenly.

Serve warm or at room temperature.

One thought on “Warm Lentil Salad with Feta and Almonds”