The battle rages on—the ants have now infiltrated the bathroom, the cat food bowl, and the area beneath my desk. Not that they haven’t met plenty of resistance. It is safe to say that I’m getting enormously fed up with these critters. Just when you think you’ve won, they attack from the other side. Strategy is second nature to these little devils.

On to a more positive note: Kelly and Kerry drove down to LA and met Jonji and I at Santa Monica Beach on Saturday. I seem to be unable to budge the tank top tan, which is just dandy. Maybe I’ll start a fad. We left the beach after a few hours, once we realized that the wind was negating any warmth from the sun, and made our way home. We parted ways with Kerry, who was going to a baseball game with her boyfriend, Max. Kelly, Jonji, and I cleaned up and walked to Paco’s Tacos, the restaurant we went to a few times back in the day and which turns out to be a twelve minute walk from our apartment. What are the odds?

The next day Jonji and I ran several errands, including locating a stain removal soap that I’ve been looking for for weeks (victory!) and buying a helmet for Jonji (there has never been, and will never be, a human who looks better with a helmet on—no offense Jonji). We also made another trip to Neveux, this time to introduce it to some Davis-turned-LA friends, Todd and Jessica. And when I say we went to introduce it to them, I mean I decided Jonji and I were going and then we thought to invite them. I honestly could eat several pints of the stuff and not feel sick. In fact, I’ll go so far as to say it actually makes me feel healthy.

My summer vacation officially ended yesterday with my first of many six-hour school days. And that was just one class. On the whole, the experience was good—we had to get into groups of five and find something we all had in common, then create something wearable that symbolized this commonality. The hard part, it turns out, was actually finding the common factor between the five of us. At the end of three hours, however, we had successfully found out that all five of us love the smell of coffee, which visually manifested itself as headpieces with “coffee beans” hanging down around our noses. 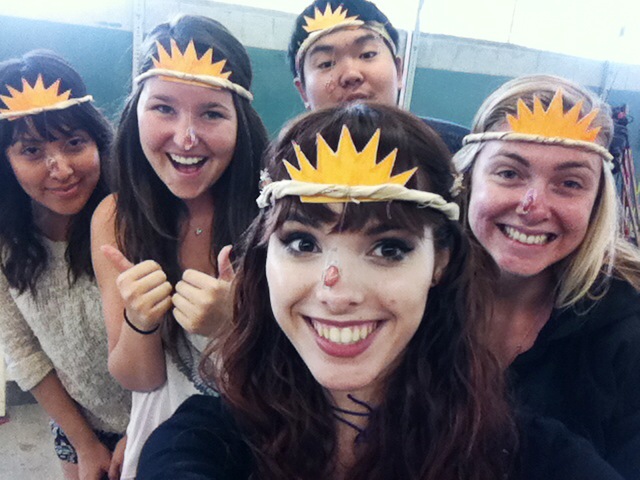 When I finally got home, I started making dinner, since Jonji and I had decided to go to the 6 PM CrossFit class plus the 7 PM yoga class (side note: this yoga class is the best! It’s mostly stretching, therefore I’ve started realizing how inflexible I really am). Since such an endeavor keeps us away from home so late, I made dinner beforehand. Class was fun—we got to do some muscle ups and squat cleans, two of my favorites. Going straight from CrossFit to yoga makes the beginning of yoga kind of like bikram, but it’s totally worth it.

Little Arielle is doing well. She has taken to showing us her belly a lot, which is a good sign. She’s also found her favorite spot in the apartment: our bedroom windowsill behind the curtains, which is a great spot. If I could fit there, I’d lay there too. Be warned—there are plenty of cat pictures coming your way! I would apologize but I think I’m actually doing you all a favor.

The recipe below is a go-to recipe that every aspiring chef should have in his or her repertoire, or so I’ve read. It’s basic, not too difficult or finicky, and it can be used as a base for other recipes. In fact, I’m making it tonight!

Prepare the potatoes: cut each potato into small chunks, roughly the size of the end of your pointer finger, and place in a large bowl. Slice onion in half, then in half again. Slice each half horizontally into chunks similar in size to the potatoes, then add to the bowl. Slice the fennel bulb in half, then cut out the major part of the root on each side. Slice each half in half again, and slice horizontally like the onion. Add to the bowl. Toss the contents of the bowl with enough olive oil to coat everything, add roughly 2 tsp salt and 1/4 tsp freshly ground pepper and toss everything again. Pour contents of bowl into a 9 x 12 glass or ceramic baking dish and set aside.

Prepare the chicken: with the chicken breast-side up on a large plate, rub the chicken all over with a few glugs of olive oil, half the thyme leaves, and half the garlic. Take care to rub inside the cavity as well. Sprinkle salt and pepper over the entire top side. Make small incisions just below the breasts, where the skin begins the come off the bird. Stick your finger inside the skin as far as you can go and then place two chunks of butter on each breast side, underneath the skin. Turn the bird over and repeat the process, minus the butter under the skin. Place the last butter chunks wherever you want, including inside the cavity. Place the shallot in the cavity, as well as a few sprigs of thyme.

Place chicken, breast-side down, on top of the potatoes. Take care to nestle it down a bit, so that the potatoes are more on the sides rather than underneath the chicken itself.

Place the baking dish in the oven and cook for 25 minutes. Turn the oven down to 400°F and cook the chicken, breast-side up this time, for another 30 – 35 minutes, until the skin is crispy and golden brown. Stir the potatoes before placing them in the oven for the last 30 minutes.

Let rest for at least 10 minutes before cutting up and serving. Don’t be greedy—share the skin!

Use the carcass for chicken stock. 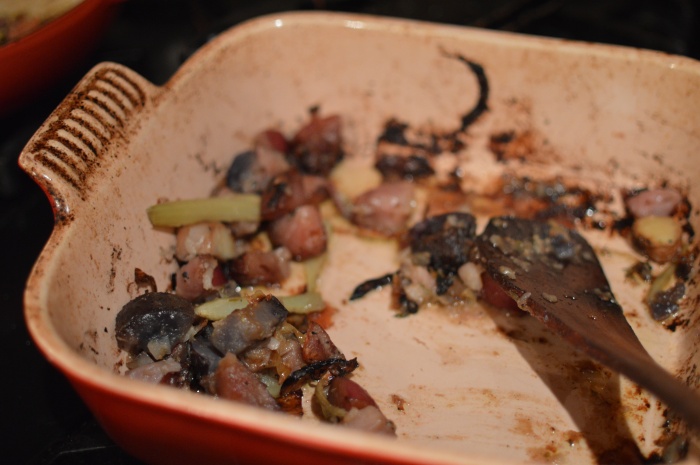 One thought on “Roasted Chicken with Potatoes”

There was an error retrieving images from Instagram. An attempt will be remade in a few minutes.